The day I realised our dog has a scarcity mindset

I walk into the living room. The dog raises its head from the sofa and stares at me move across the room towards the kitchen. I'm getting some tea.

It's already on the carpet. It moves towards me, staring.

Kika stays a half metre away from me at all times, tip-tapping her little paws as I move around the kitchen. I pull a mug from the cupboard next to the fridge. She starts to get excited. I notice and look down at her.

A low growl comes out of her tiny Yorkshire Terrier frame. The growl is also somehow high-pitched.

It doesn't matter what I've said. I've engaged with her. She knows I'm listening, and she has a lot to tell me. Her growls and yapping begs keep going.

I roll my eyes.

I walk to the fridge, her bouncing in delight as she follows me.

I open the door and take out the tin of processed nipples and ears. Moving to her little plate, she is giddy. I paste the vile sludge into the grooves of the plate with the spoon, while she keeps trying to push her head in to take a quick bite. I keep pasting, making sure the stuff is deep in the grooves and guaranteed to take a while to devour. I move away and she gets to work, violently swallowing and licking, grunting deeply as she ploughs ahead.

This is her third portion of food in less than 2 hours. She weighs 4 kilos. She doesn't need to eat 10% of her weight everyday. Nobody does.

I can hear fear in those whines, not just selfish demands. Slurping down her cold gruel, you can hear her relief.

The scarcity mindset was something I had heard about many times on podcasts talking about Stanford professor Carol Dweck's theories. She has a popular book called Mindset which lays it all out properly.

Dweck states that people either have a growth mindset or a fixed mindset. The former means you have a sense that there's always opportunity to get more or improve at some activity, no matter what other people are doing. Meanwhile the latter fixed mindset, sometimes more dramatically called the scarcity mindset, meant that you think all resources are fixed or limited, including your own intelligence and skills.

I could see how this definitely applied to people. But did it apply to dogs?

I had lived with other dogs. One dog, Edek, who belonged to an old flatmate, would be presented with a whole day's food first thing in the morning. He would just pick at the bowl every so often throughout the day, unemotionally rationing out his food without any seeming forethought, just naturally listening to when his body felt hunger.

But the thought of leaving a huge bowl of food out for Kika was laughable.

She would certainly eat everything in 15 minutes, and then ask for more soon after. It was almost as if she had no memory of eating, but she must have felt full.

We inherited Kika from my wife's late parents

When we became her guardians, Kika was around 50% over a healthy weight.

She had broken her own leg going down some stairs because she was so fat. The vet told us they wouldn't operate on her unless she lost weight because there was no point, it would just happen again.

Imagine if overweight people broke their legs like Yorkshire Terriers do.

You'd think that'd be incentive to change their ways. But dogs aren't time-binders like humans. They can't imagine a future where they've worked towards some personal health goal.

This dog was obese because she ate everything she saw. She had lived in a house with frequent guests, which meant frequent cakes and biscuits. This tiny thing had eaten enough cheesecake to feed an orphanage.

The ease of access to food meant Kika thought that was simply how things are.

But when she moved in with us, there was no cake on the coffee table. She would sneak onto the table when she thought we weren't looking and be disappointed to find salad. She'd try eating it anyway, but she wasn't happy.

I am certain she became convinced that all the food was running out.

It didn't help that her guardians who had raised her since a pup had disappeared. They used to be around all the time with cake and sausage, but now some other people with salad and measly lentils were clearly an omen - the world was coming to an end and hoarding was necessary. Being a small dog, she felt the best place to hoard food was in her belly.

Her scarcity mindset didn't just apply to food though

Kika had lost her owners, her parents. After they had both died, she was looked after by my wife. Having lost two people already, there was no way she was going to lose a third.

She protected my wife to the nth degree. If she happened to be lying down, Kika would lie next to her and snap at anybody who came near, myself included.

We once took her to a dog trainer who quickly observed that Kika thought my wife was a resource. I thought that was quite a vague word, but she definitely did seem to hoard her as if she were a precious treasure.

And whenever my wife left the house, Kika would whine and look sad, clearly feeling like she had been abandoned again. She'd whine even though I was right there feeding her, so this was obviously pretty insulting.

Often Kika would ignore me for a good hour or so, and I'd hear the tip tap of her little feet approaching. She'd come over to my feet and lie on her back exposing her belly, clearly asking for a belly rub.

How nice it is to rub her belly, she would let me know, I should totally do it. After 30 seconds, she would abruptly snap back up and start walking towards the kitchen her tail wagging and looking at me.

Oh. So you didn't want affection from me.

You didn't want to share an intimate oxytocin-releasing interaction. It was just a you-rub-my-belly-and-I'll-let-you-give-me-food type situation.

It felt both dirty and embarrassing, like when a stag party ends up at a strip club. Inevitably a stripper comes up to each person and starts to feign chit chat. What's your name? You having a good night? But you know they're not interested in small talk. A few minutes go by and they suddenly tell you they like you and want to give you a lap dance. For a fee, of course. The entire interaction is so gratingly transactional that it's almost laughable.

That's what Kika was. Our dog was an obvious and cynical stripper.

Maybe she did once have people just pet her out of love, but now petting had a fee.

But can you teach an old dog new tricks?

Understanding that Kika had a scarcity mindset, I wondered if it were possible to train her to have a growth mindset instead. But then it's hard enough for us humans to do that. We could be in therapy for years and never switch.

An 11-year-old Yorkshire Terrier was a slightly taller order. She didn't even obey the command 'Sit!'.

To be honest, she barely even reacted to 'Kika!', her own name.

She was actually capable of learning new skills though. When my wife went out, Kika soon figured out how to sneak under the gate to try find her.

That was a very annoying period. She ran away three times.

Each time, she ended up in the neighbour's yard where they threw out leftover meat and bones. I ended up blocking the hole running under the gate with the high-tech solution of two old spades. She then figured out she could push the faux wind breaker I later also installed and jump through the bars.

That was also a very annoying period.

Eventually she stopped running away because I wouldn't let her out when my wife was leaving anymore. I guess she realised she didn't know where to follow her, so that put a stop to it.

I think that's also when she started leaving turds on the driveway rather than in the grass. She wanted to publicly record her displeasure.

I'm not sure poo protests really count as veering towards a growth mindset.

Eventually... it was her scarcity mindset that led to Kika's death

One night, although we had fed her properly throughout the day, Kika dragged a dried rabbit ear snack into our baby son's bed. He was having difficulty falling sleep already. The sound of the ear cracking in her teeth just irritated his crying further, so we knew we had to hurry Kika out. But my wife was lying in the bed too, there trying to soothe our son.

So two of her favourite resources were in the bed: my wife, and smelly food.

As I tried to get Kika out, she soon showed us that she was furious at the very suggestion. She snapped at me, fearing losing her rabbit ear. On my third attempt to grab the ear, she dug her little teeth deep into my hand, making me pull it up and away in pain. She was pulled up with it, hanging on and growling with rage.

A few seconds later, she fell to the floor in an awkward position.

We don't know if it was the shock of the short fall, or maybe she still had rabbit ear in her throat, but she started to convulse and had a heart attack.

She died in my hands soon after.

If she had just gotten out of the bed away from my wife when I asked her to. If she hadn't thought that rabbit ear was the last one on Earth. Maybe she'd still be alive.

If she had been a human, I think I'd have been charged with manslaughter, but mostly I regret not seeing all the signs over the years: the way she had always angrily protected my wife, the way she always thought she'd never eat again. It seems it had all been leading up to this inevitable sad end.

She was nearly 13. She'd had a good life. But she could have lived longer.

The moral of this story is: scarcity mindsets kill dogs. Please watch out for the signs better than I did.

A short weekly dose of my laughable attempts to build a digital empire.

Why do anything when you can just keep reading about it instead?

You may also want to read 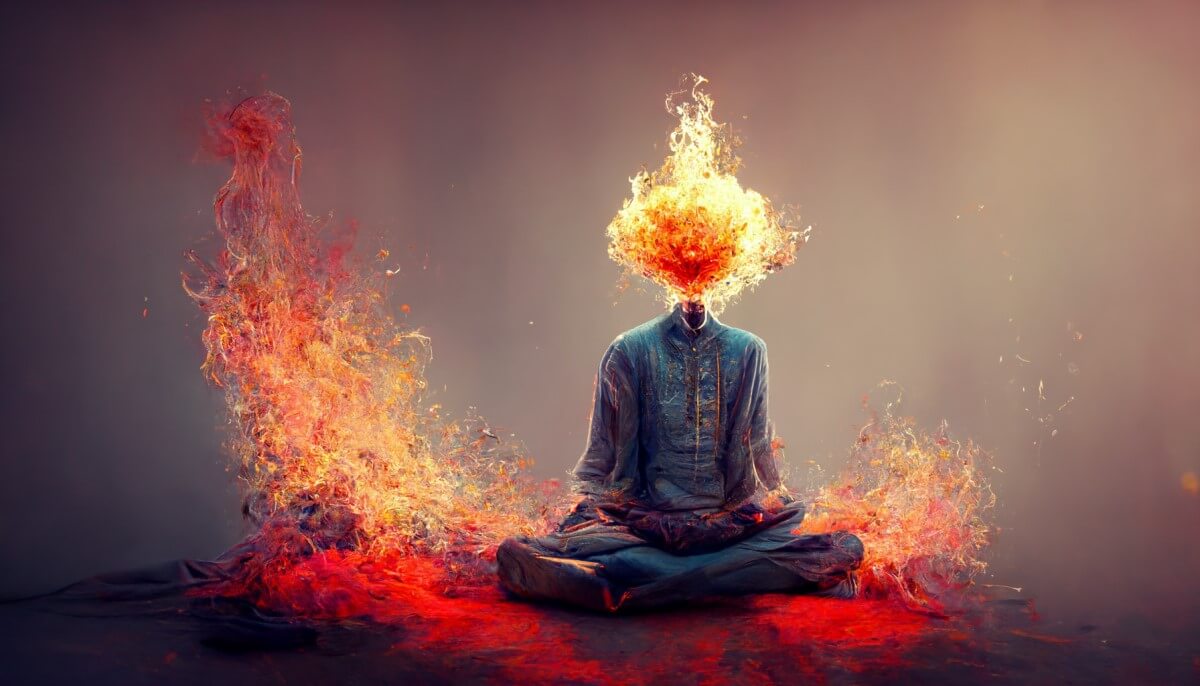 The Procrastilearning guide to meditation: 5 easy steps to enlightened enlightenment